To describe this Theory, you may know we need to heat or to cool process fluids in industrial plants to facilitate process reactions.

This article provides you a simple explanation about heat exchangers working mechanisms and applications.

Our process temperature needs to be at a certain value and to be stable. 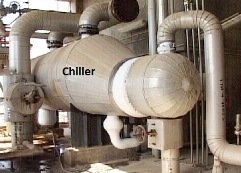 For process requirements sometimes, we need to increase fluid temperature and sometimes reduce it.

For temperature reducing purposes, an intermediate fluid such as cooling water, chilled water, a refrigerant and air are used.

Air-cooled heat exchangers are the same, but they use air as the intermediate fluid.

In most heat exchangers, two fluids are exchanging their heat without direct physical contact to avoid mixing. This is called indirect heat transfer.

To reach the sub-zero temperature, we need to use refrigerant fluid alone, such as R-11 or propylene.

For heating purposes, the mechanism is similar to the cooling. We can use hot intermediate fluid such as hot water or steam and even other hot process streams.

To proceed on the heat exchanger theory we need to know that the meaning of the following terminologies:

The Sensible heat is amount of heat that a material can exchange without changing its phase.

What is latent Heat?

The latent heat is the amount of heat transfer that a material exchanges during the change from the liquid phase to the vapor phase. 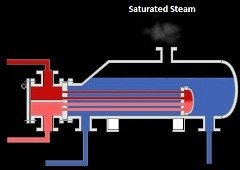 Indirect heat transfers are done in different heat exchangers such as coolers, heaters, reboilers and condensers. 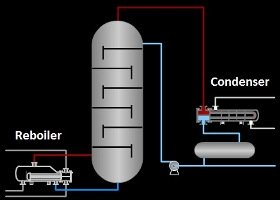 In the above, the heat exchanger that we are using to eliminate latent heat is called a condenser and the one that is used to supply steam and heat to the distillation tower is called a reboiler. We will discuss them in detail in coming paragraphs.

In all of them, we are using an intermediate fluid for heat transferring. For the condenser, it is cooling water, and in the reboiler, it is steam.

For cooler heat exchanger cooling water, refrigerants such as R-11, Propylene and propane are used.

For example, the outlet of a reactor needs to be cooled at the same time the inlet of the reactor feed needs to be heated. So in this case, a heat exchanger can be designed to transfer the heats between the two process streams and save energy consumption.

The heat exchangers are built in a way so that cold and hot fluid is separated by a metallic surface to avoid mixing.

These metallic surfaces are different in different heat exchanger types.

The metallic surface in a shell and tube and an air-cooled heat exchanger is a tube wall, and in the plate heat exchanger, it is a thin wall plate, in which each process fluid is on a different side.

What is the Convection Mechanism?

Have you asked yourself how your room gets warm when you turn on your heater?

The air around of your heater is heated; this will cause the volume to be increased and the density to be decreased, so this phenomena will cause the heated air to start moving upward.

Then cold air, which has higher density, will be replaced, so this cycling causes your room to be warmed.

This was a simple explanation of the convection mechanism, which only happens in fluids.

The mechanism is similar when you are heating water in teapot. The cycling of cold and hot water finally reaches the boiling temperature.

The same mechanism happens in the process fluid in the heat exchangers theory.

What is the Conduction mechanism?

In this mechanism the heat will be transferred by atoms and ions. Assume you put a metallic bar on the torch; the heat will be absorbed and atoms start moving and colliding with each other.

This movement will continue to the neighboring atoms and the collision will continue till the heat reaches the other side of the bar and you feel a burning of your hand. 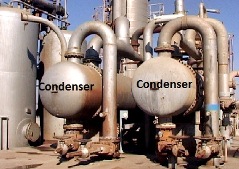 Based on the heat exchanger theory, in the distillation tower, we need to take the liquefied vapor (by cooling) in top of the distillation column and return it back to the tower's top side.

This process is called condensation, where we convert saturated vapor to saturated liquid.

The heat exchangers, which are used for condensation, are generally shell and tube type. The process stream is in the shell side and cooling water is in the tube side.

The vapors in the shell side gradually are changed to the liquid drops on the external surface of the tubes, and are collected and discharged from the shell side to the column top.

A condenser can be placed in the top of distillation tower and the application of a pump is not necessary.

But in this case, maintenance and cleaning of the heat exchanger will be difficult, so condensers are placed in the ground level and pumps are used to transfer liquid to the top of the column. 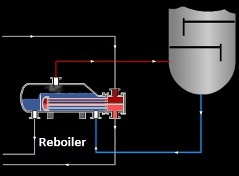 Based on heat exchanger theory in a distillation tower, we need to supply steam and heat to the tower's bottom side. The reboilers generally are shell and tube heat exchangers.

The process stream from the tower's bottom side enters the shell side and steam enters the tube side of the reboiler and after the heat transfers, the process fluid returns back to the tower bottom side. 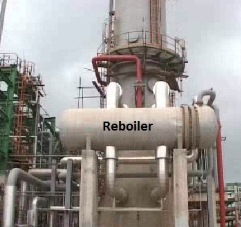 These heat exchangers are used for cooling process streams, and generally cooling water, chilled water, air, refrigerants such as R-11 and propylene are used.

If coolers are used for the cooling of saturated vapors, a knock out drum might be place before the cooler to separate the liquid from vapor. 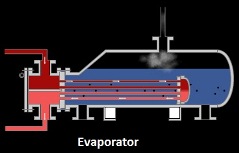 In heat exchanger theory, any heat transferring equipment that is used to vaporize a liquid is called vaporizer, and if the liquid is water, it will be called an evaporator.

These heat exchangers are used to supply latent heat, and their outputs always are saturated vapor.

The difference between distillation and vaporization is in the containing element. The vaporization only contains one element. 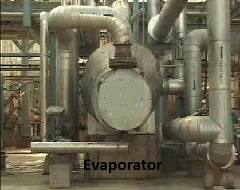 Evaporators are used for several applications such as the supply of pure water for boiler feed water.

The water drained from the evaporator is called blow down.

The produced vapor will be liquefied in the condenser heat exchanger and then will be sent to the boiler feed water tank.

Return from Heat Exchanger Theory to Inspection for Industry Hom